The Szczecin Philharmonic was opened on 5 September 2014 and it has been the seat of the local symphony orchestra since then. Immediately after its opening, it became an icon of this seventh largest city in Poland. The modern façade, which is sometimes translucent and sometimes glowing, contrasts with the historic buildings, but overall it fits organically in, matching the city rhythm and layout.

The modern concert building, nicknamed the "glacier" was designed by the duo of architects Fabrizio Barozzi and Alberto Veiga. It stands near the historic centre of Szczecin on the site of the original concert hall bombed during World War II. The large hall, also called the golden or solar hall, can hold up to 1,000 spectators, the smaller one - lunar, is designed for chamber music and has a capacity of almost 200 seats. There is a foyer with a café as well as a gallery and other backstage facilities. The stage for the orchestra is parallel to the front edge and it is closed by a balcony for the choir.

The building is in line with modern technologies and offers cost-effective solutions and efficient operation. It adopts passive energy control systems and other sustainability features, such as double facade, natural ventilation, LED lighting with minimal energy consumption, multi-layer roof sheathing optimizing not only acoustics but also thermal insulation, etc.

In 2015, the building received the prestigious European Mies van der Rohe Award, which is awarded every two years by the European Union. The mayor of the city Piotr Krzystek considers the award a historic moment and a great honour for the city and the whole of Poland. The building of this philharmonic is the first one in the new EU members to have made it to the finals and winning this award. 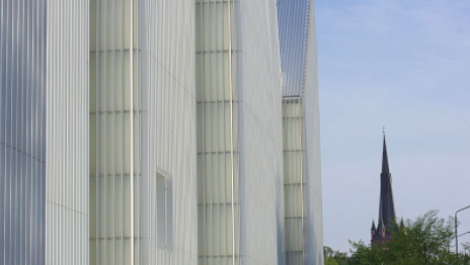 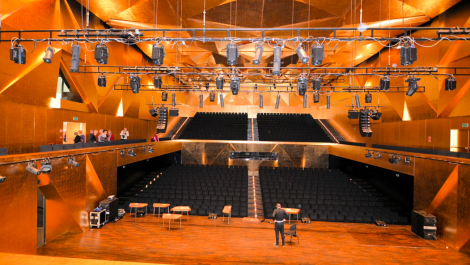