Open 24/7, almost literally! It is not only music that makes a person alive. What will the new building on the main city artery offer to the people of Ostrava?

Functional use
Janáček Philharmonic Ostrava
House of Culture of Ostrava

The new concert hall should serve mainly as a quality public space for the inhabitants of the city of Ostrava and its surroundings, it should become a base for the orchestra, which is an integral part of this city, and thus enable fundamental artistic development of one of the most important organizations established by the city of Ostrava. It should provide the background for the Leoš Janáček International Music Festival or the Ostrava Days of New Music and offer a space for communication with anyone who shows interest in culture. Overall, the building should significantly enhance cultural events throughout the region.

The grand hall with a capacity of 1,300 seats in the auditorium, arranged in a so-called vineyard, will be divided into smaller sections, and part of the auditorium will also be behind the stage. A sufficiently steep arrangement ensures good visibility and smaller terraces create a feeling of intimacy. The farthest seats should be about 28 meters from the stage. The excellent acoustic properties of the hall are assumed thanks to the cooperation with experts from the Nagata Acoustics studio. A sound reflector should be hung at a height of 15 meters above the stage, which will reflect the sound with an ideal time delay for both musicians and the audience in the immediate vicinity of the stage. Rectangular ceilings improve the acoustics on the stage so that musicians can hear not only themselves but also the others. The Janáček Philharmonic Orchestra will use the hall for daily rehearsals and concerts, which will enable it´s artistic development. The quality of the sound is further enhanced by the maple wood panelling, which is also used for the production of violins. A chamber hall with a capacity of 475 seats will be created in the premises of the existing social hall of the House of Culture of the City of Ostrava. The stages in both halls will be composed of movable panels, which will allow flexible adaptation of the space to the needs of artists, orchestras and other uses of the halls. The halls will thus also become a commercially attractive and sought-after space for organizing various not only musical projects. 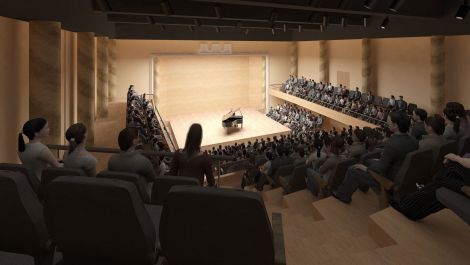 In addition to the concert hall, the extension will also provide storage space for larger musical instruments, which must be close to the stage due to more demanding transport. This applies, for example, to pianos, which require a room with constant temperature and humidity, which guarantees a longer service life. The project does bears in mind the visitors needs too. Therefore, there is also a space for a cafe overlooking the park and a lounge for about 40 people.

The space of the existing restaurant will be prepared for a new operator.

The design also envisages the use of the central wing of the cultural house for the changing rooms of the orchestra members, conductors and soloists. There will also be offices, tuning rooms, rehearsal rooms and storerooms for musical instruments. In one of the side parts of the existing building, a recording studio will be created, which, thanks to its parameters, will be the only one of its kind in Moravia and will be used not only for the Philharmonic's internal needs but also for commercial use.

The new Educational Centre with a maximum capacity of 300 people will find its place in the premises of the former Cinema for Demanding Audience. It will be an independent space with its own entrance focusing on music, theatre and art workshops for schools and the general public. It will also be possible to use this space for short-term rentals.

The Art Cinema will be transformed into a commercial conference hall with a capacity of up to 200 seats.

The entire project of the reconstruction of the House of Culture of the City of Ostrava is also being prepared. The architects base their designs on the original construction plans and implementation documentation of this listed building by the architect Jaroslav Fragner. The study restores the original form to the spaces related to the Cinema of the Demanding Audience. The aim is the overall renovation of a number of spaces of the House of Culture with respect to the existing valuable materials and details. The material solution is based on the existing used materials, wood panelling and other accents, which give the individual spaces their individuality and unmistakable charm. At the same time, the structure as a whole harmoniously and conceptually integrates both the house of culture as well as the entire project of the new concert hall and the rebuilt chamber hall.

JPO continues the tradition of the Ostrava Radio Orchestra, which was founded at a time when such greats as Paul Hindemith, Sergei Prokofiev and Igor Stravinsky visited the city. The symphony orchestra was then established in 1954. Very quickly, it built a strong position on the domestic stage and soon began to perform abroad. To name a few, Václav Neumann, Karel Ančerl, Charles Mackerras, Plácido Domingo, José Carreras, Diana Ross, Rudolf Firkušný and Svjatoslav Richter collaborated with the orchestra.

In the recent past, Anna Netrebko and Jonas Kaufmann have sung with JPO, the baton has been held by Antoni Wit, Michail Jurowski and others. The reputation of JPO is ensured mainly by a hundred "domestic" first-class musicians. The orchestra excels with the unique softness of the strings and the sharp sound of the brass section. It puts on over fifty concerts a year for the home audience in Ostrava, and it is regularly invited to perform at domestic and foreign festivals and tours (in recent years the orchestra has visited New York, Seoul, Paris, Beijing, Munich, China, Germany, Spain, Italy, Switzerland and Poland). Last year the orchestra performed in Hamburg, Vienna and together with the pianist Lukáš Vondráček and conductor Leoš Svárovský it completed a successful tour of South Korea. JPO enters the 2020/21 season with the new chief conductor Vassily Sinaisky, the main guest conductor Petr Popelka and the resident soloist Lukáš Vondráček .

The JPO repertoire obviously includes Leoš Janáček, whose name the orchestra proudly bears, Antonín Dvořák and other Czech composers. JPO´s recordings have been released on music media by prestigious recording companies, the orchestra has produced music for several films, it collaborates with popular domestic musicians (Tomáš Klus, Ewa Farna, Jarek Nohavica). JPO also focuses on educational cycles for young people and for the elderly, as well as the education of young talented soloists and conductors, who are given the opportunity to perform with the orchestra in a separate concert series.

JPO proves to be a desired and successful orchestra, which is definitely not going to be satisfied with the goals already achieved.

The home stage of JPO is the House of Culture of the City of Ostrava. However, its spaces built at the turn of the 1950s and 1960s for the purpose of holding cultural events have not been sufficient to meet the demands of neither the audience nor the orchestra for a long time.

The House of Culture Ostrava

The House of Culture of the City of Ostrava is one of the largest, but also the most important cultural and social institutions of the Moravian-Silesian metropolis. Dozens of agencies, schools and companies are keen to cooperate, and the events it offers are visited by around 300,000 people a year, making it one of the most visited institutions in Ostrava.

Apart from to the usual dramaturgy, which reflects in the wide variety of theatre shows, concerts, exhibitions, conferences, seminars, film performances, programs for children and teens, balls and courses, it is a place of leisure activities for Ostrava residents and a centre for keeping fit and healthy.

Exceptional events include live satellite broadcasts from the Metropolitan Opera in New York and ballet performances from the Moscow Bolshoi Theatre. The House of Culture Ostrava is seat to the Janáček Philharmonic Ostrava and the Leoš Janáček International Music Festival, a highly prestigious cultural institution for which the House of Culture is not only a suitable administrative background, but also a place for their main concert activities in Ostrava.

The author of the unique building of the House of Culture of the City of Ostrava, which was declared a cultural heritage site in 2004, is the architect Jaroslav Fragner, who is one of the most important representatives of Czech functionalism. His most famous works include the completion and reconstruction of Karolinum and the Bethlehem Chapel in Prague or the building of the power plant in Kolín, which was dominated by the highest chimney in Bohemia at that time. The building of the House of Culture Ostrava was built in 1956-61 and is often referred to as a "white ship in the middle of Ostrava". Fragner's House of Culture cannot simply be understood as a work of socialist realism, but rather as an example of the architecture of the new classicism with elements derived both from Fragner's earlier work and from the emerging Brussels style. What brings the building closer to the manifestations of socialist realism is primarily the application of realistic works of art thematically linked to the cult of work and the celebration of workers and at the same time an emphasis on festivity and decoration of interiors, for example the sculptural decoration of the main facade, vestibule and the main hall, and the use of columns decorated with marbling.

The Culture House began to be used by the public in 1961.