Unique architectural solution, state-of-the-art technology and distinctive style. The first building by the American architect Steven Holl in Central Europe will also be the new landmark of Ostrava.

The design and the whole project of the building

The new concert hall, which from above resembles a violin case, a spaceship or even a stingray, has the potential to become, like the Eiffel Tower in Paris or the Sydney Opera House, a new symbol of the city of Ostrava. Eagerly awaited by some, unwanted by others. The appearance of the building has already evoked a number of passions, as it is often the case with such bold buildings.

The author of the design of the new hall, the American architect Steven Holl, thinks of the building as "a perfect acoustic instrument in its case". The original design from the Steven Holl Architects studios from New York and Architecture Acts from Prague will connect the existing building of the House of Culture of the City of Ostrava from the 1960s with a modern hall with top acoustics.

The project plans to use the premises of the existing listed building for musicians. At the same time, it will connect the concert hall with 28.října Street and with the adjacent city park. However, the original building of the culture house designed by Jaroslav Fragner in 1954 and its historical details will be preserved. Only minor interventions are planned, e.g. the construction of a connecting corridor. This corridor will allow a smoother transfer of visitors, as well as staff and artists between the two buildings. 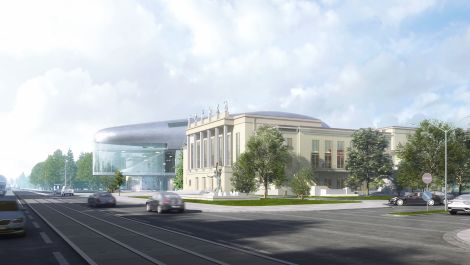 Transformation of the building and its surroundings

The new hall will be oriented to the north side towards the Milada Horáková Park. The construction of the new building will be placed from the back from the park through the original building to 28. října Street. The original entrance to the culture house will be preserved and at the same time a separate entrance to the new building will be created. There will also be a souvenir shop, a café and a glass lobby with city views.

Steven Holl's characteristic work with natural light (using glass walls and skylights) will provide the building with plenty of daylight. Visitors can enjoy the play of light, its changes during the day and seasons. The skylights will also serve as night light sources for the main entrance to the building. Thanks to the glass wall at the back of the building, the adjacent park will be illuminated at night.

The promenade leading along 28. října Street is one of the distinctive elements of the House of Culture of the City of Ostrava. In addition to increasing its aesthetic value, it also has a practical function as a passage to Milada Horáková Park. It is bordered by two large fountains with bronze sculptures (Youth and Girls' Secrets) by the sculptor Stanislav Hanzík. Their apparent erotic charge provoked resentment from part of the conservative public at the time and the sculptures were at risk of being removed, which in the end did not happen due to the rapid social events in the 1960s. The entrance to the new concert hall will be located in the middle of the promenade and the newly created lake will reflect the new building.

Technical specifics and uniqueness of the building

The winning concept brings not only original architecture, but also innovative and demanding technological solutions that will be environmentally friendly, ensuring long-term sustainability and low operating costs. The new building has the potential to become one of the most environmentally friendly buildings in the Czech Republic. The outer shell of the hall will be made of patinated and 100% recyclable blue-grey zinc, which is highly flexible and suitable for sheathing curved geometric shapes.

The large roof of the existing building has considerable solar potential for the location of an integrated photovoltaic system. This could cover almost all the annual electricity consumption in the new hall. In this respect, the building can become a pioneering project using local resources with zero emissions.

The use of natural light (glazed walls and skylights) will provide the building with sufficient daylight and thus reduce its dependence on non-renewable energy. Very low values of the heat transfer coefficient are achieved in glazed surfaces by using insulating glass with a vapour-deposited layer, the so-called low E (low emissivity). In addition, low-iron glass panels have a more neutral overall colour complementing the zinc façade.

Another way of making the building as environmentally friendly as possible is the choice of heating and cooling. The team of authors works with several options using heat pumps of closed and open systems. All these solutions promise not only high air quality and comfort of the interior of the building, but especially reduction of heat losses, reduction of electricity consumption and minimal costs of operation and maintenance with a low carbon footprint.

Behind the building towards the park, some water elements will also be created, partly using rainwater. After cleaning, it will be taken to the pond. Its evaporation will help to improve the microclimate and to keep the live filter (trees) in good condition even during dry spells. The water overflowing from the pond is captured in the underground system of large reservoirs (200 m3), which serves as a thermal balancing and replenishing source for all other water elements.

The author of the design of the new concert hall Seven Holl is one of the most famous American architects today. In 1976, he founded the Steven Holl Architects Studio, which has gained international recognition for a number of its projects, whether it is museums, residential complexes or student dormitories.

Holl's buildings are influenced by the poetics of space and material and reflect his idea of connecting man with the achievements of modern times. They are the result of his interest in the history of architecture and the progress of science. He himself believes that architecture should reflect the time in which it was created, because it is one of the most enduring evidence of the development of human culture.

Steven Holl is one of the advocates of environmental sustainability and a member of a number of companies for the preservation of the landscape and the environment. In most of his projects, he promotes the grassing of roofs, recycling or the use of geothermal energy. His water purification project in Hamden, Connecticut, which has the largest grass roof in that state (nearly 2,800 square metres), was ranked among the Top 10 Green Projects in 2007, awarded by the American Institute of Architects Committee on the Environment every year.

In 2016, he was awarded the Daylight Award for working with daylight in architecture. For Steven Holl, daylight is not just a helper to complete the atmosphere in buildings and enrich the sensory perception of their users. In all proposals, he faces the challenge of bringing light to places where it does not usually occur. "I really care that all rooms are naturally lit. Whether we are designing a hospital room, a conference room or a gallery, daylight is important for all these spaces. Even inside the building, you have to be able to see how the day goes and see the sunset. ”

The way he works is also interesting. He prefers to record his initial designs in a watercolour sketchbook and seeks inspiration in music, philosophy and literature. "I do not rest until I give shape to the concept. However, once I make a decision, I stick to the decision and the whole team works to strengthen it.” Along with the original concept of each project, numerous structural elements also gain an initial impetus from Steven Holl's watercolour sketches. "I need to constantly draw so that I can guide the construction process. After all, I have a whole team of fellow co-workers who have to move in the same direction with me.” For the concert hall in Ostrava, he drew a theme directly from the composer Leos Janacek. His "timing theory" (sounding, adding and uniting) was the inspiration for the arrangement of the acoustic panels of the new concert hall. 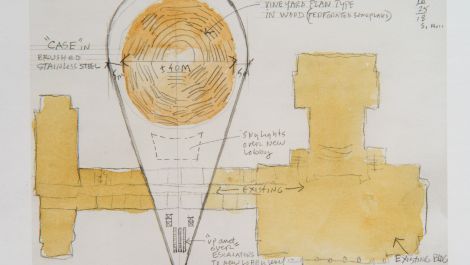 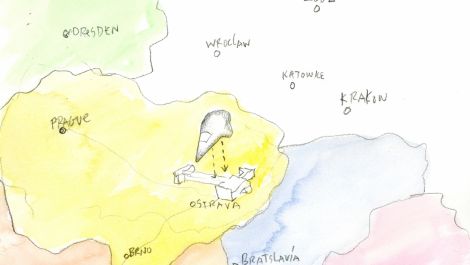 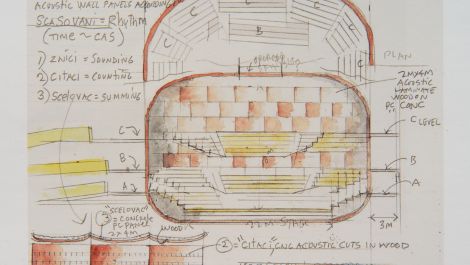 Martin Kropáč graduated in architecture from Columbia University in New York in 2010 and together with Hana Petříková founded Architecture Acts - originally an experimental platform for architecture, which is now a multidisciplinary architectural office operating in Prague and has a large talented team of architects from all over the world.

Both architects build on their experience gained in the architectural studios of Alberto Campo Baeza, MR Architecture and Steven Holl Architects. In 2015, they received an award and a one-year residency in the GSAPP New Incubator pilot project under the auspices of Columbia University in New York and the New Museum of Contemporary Art.

"I had worked in the Steven Holl Architects studio for five years before I decided to return to Prague and continue with my own work. Since then, Steven Holl and I talked about a joint project a few times before the competition for the concert hall in Ostrava appeared,” adds Martin Kropáč. He worked as an architect on several projects, such as the realization documentation for the Gallery of Contemporary Art at the University of Richmond, and the black box theatre for the Lewis Center for the Arts on the Princeton University Campus.

Architecture Acts specialize in designing buildings intended for cultural use, currently also in buildings of other civic amenities, apartment buildings and homes. An integral part of the practice is teaching and organizing architectural workshops and exhibitions.

The design and provision of appropriate acoustic modifications to the Ostrava concert hall were entrusted to the renowned Japanese specialist Yasuhiso Toyota, who, together with his studio Nagata Acoustics in Tokyo, has secured a worldwide reputation thanks to his excellent work in concert halls across continents. Since 1971, Nagata Acoustics has designed almost 60 concert halls around the world - thanks to their "acoustics", the sound resonates perfectly in halls in Paris, Shanghai, Tokyo, Los Angeles, Katowice and Hamburg. The aim of their work is to create a neutral acoustics in which the strengths and virtues of each orchestra are heard.

"Every concert hall needs to be tested acoustically on a scale, but truly elaborated model. Thanks to this, perfect acoustics are created and it is thus possible to eliminate, for example, unwanted echoes. Scattering the sound waves results in a very fine sound distribution throughout the auditorium. ”

The keys to quality acoustics are two elements - working with space and choosing the material. Before the construction of the hall begins, Toyota enters all the designs into a computer model to estimate the acoustics of the resulting building. If there is no suitable material, he feels free to use one that has not yet been tested. This was the case, for example, in Hamburg. The walls of the Elbe Philharmonic Hall were covered with a special plaster and wood fibre board with many depressions. These ensure that the sound waves are reflected correctly. He is able to come up with similar solutions thanks to his knowledge of physics, mathematics and over forty years of experience.

If the concert hall already has its specific outlines and it is almost finished, then the Japanese master relies on his own hearing. He is said to be trying to stomp on the stage or to clap in the auditorium. He listens to the first music rehearsals from all corners. Even in this phase, the acoustics of the hall can still be improved, for example by adding sound reflection boards and panels, or by muting the sound in some places with a properly placed screen or a curtain.