The city of Katowice in Poland, with the population of 300,000 people, has had a unique space for music production since 1 October 2014. The project of the seat of the Polish National Radio Orchestra was created by Konior Studio of the architect Tomasz Konior, with Nagata Acoustics in charge of the acoustics of the hall. The building has a generous background, excellent acoustics and in addition to two halls, there is also a top recording studio, which is connected to both halls. According to many experts, the hall is one of the most modern concert halls in Europe.

One year after the opening of the hall, Katowice received the title of Creative City of UNESCO Music. "We have long believed that Katowice is a city of music. The UNESCO title confirms that we were right. For us, this is proof that a strategy to invest in culture is successful. Katowice is entering a prestigious club of cities known for their musical life. That is why people are proud and very satisfied, "said Marcin Krupa, Mayor of Katowice. The Creative Cities Network (UNESCO) was started in 2004 to promote the economic, social and cultural development of cities based on creativity. This network includes about 120 cities from all over the world, sharing best practices in the field of cultural development.

The director of NOSPR Katowice, Joanna Wnuk-Nazarowa, evaluates the new hall also in connection with the increased interest of the audience: “We have a lot of music lovers and audiences with refined taste. Besides, it's also a short distance to Krakow, so people from Krakow finally started coming here, because before, when we had an ugly hall and bad acoustics, it didn't even occur to us. And it's only 80 km along a quality highway, so it can be done in 50 minutes. Now people from Krakow even buy subscriptions. That's the magic of those beautiful concert halls, architecturally interesting, with great acoustics. ”In general, there has been a sharp increase in the audience. There is so much interest in some philharmonic concerts that they have to repeat them on two consecutive days. 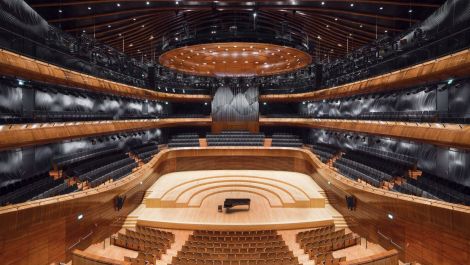