Frank Gehry's buildings attract tourists from all over the world, they are unique and unrepeatable. In the first 3 years alone, the museum was visited by 4 million tourists and made a profit of 500 million Euros. This has had a positive effect on hotels, restaurants, shops and urban transport, with more than € 100 million collected in taxes. Architecture has become an unprecedented investment with a return within just a few years.

The Spanish city of Bilbao has a population of nearly 350,000 inhabitants. In the mid-1980s, this former industrial city fell into a deep crisis. A number of steel mills and shipyards went bankrupt, and a quarter of the locals were left unemployed, which had a major economic and social impact on the region. In addition, the heavy industry left behind rather heavy economic damage.  In 1991, the Basque Government agreed to build a museum with the Solomon R. Guggenheim Foundation, which has an equally famous branch in New York. The government provided a total of $ 100 million for the project, which covered all construction costs. In exchange, the foundation agreed to manage the institution, which also included the organization of temporary exhibitions. The grand opening was held on 18 October 1997 by the former King of Spain Juan Carlos I. One of the patrons of the project was also KLM Airlines, donating $ 1 million for the construction.

The memorable silhouette of the museum quickly became so popular that it gave rise to a completely new term "Bilbao effect". In essence, it overshadowed other projects that are much more important for the day-to-day running of the city (construction of a new international airport, a harbour and a high-speed railway, or the underground connecting new city districts). The most surprising aspect of the building is its impact on the city's economy.

The sheathing of the Guggenheim Museum is made of 30,000 titanium plates. Unlike other materials, titanium creates the impression of a certain plasticity and the façade behaves like a living organism, which is often described as fish scales. The museum's permanent collections include works of art by important artists of the second half of the 20th century, such as Andy Warhol. In addition, there are regular exhibitions of local and foreign artists. The total capacity of the exhibition areas is 11,000 m2. 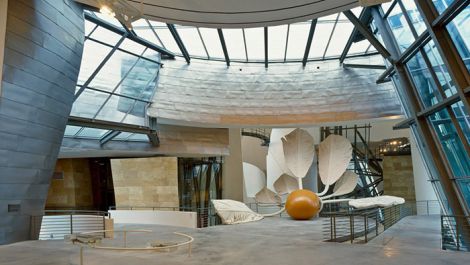